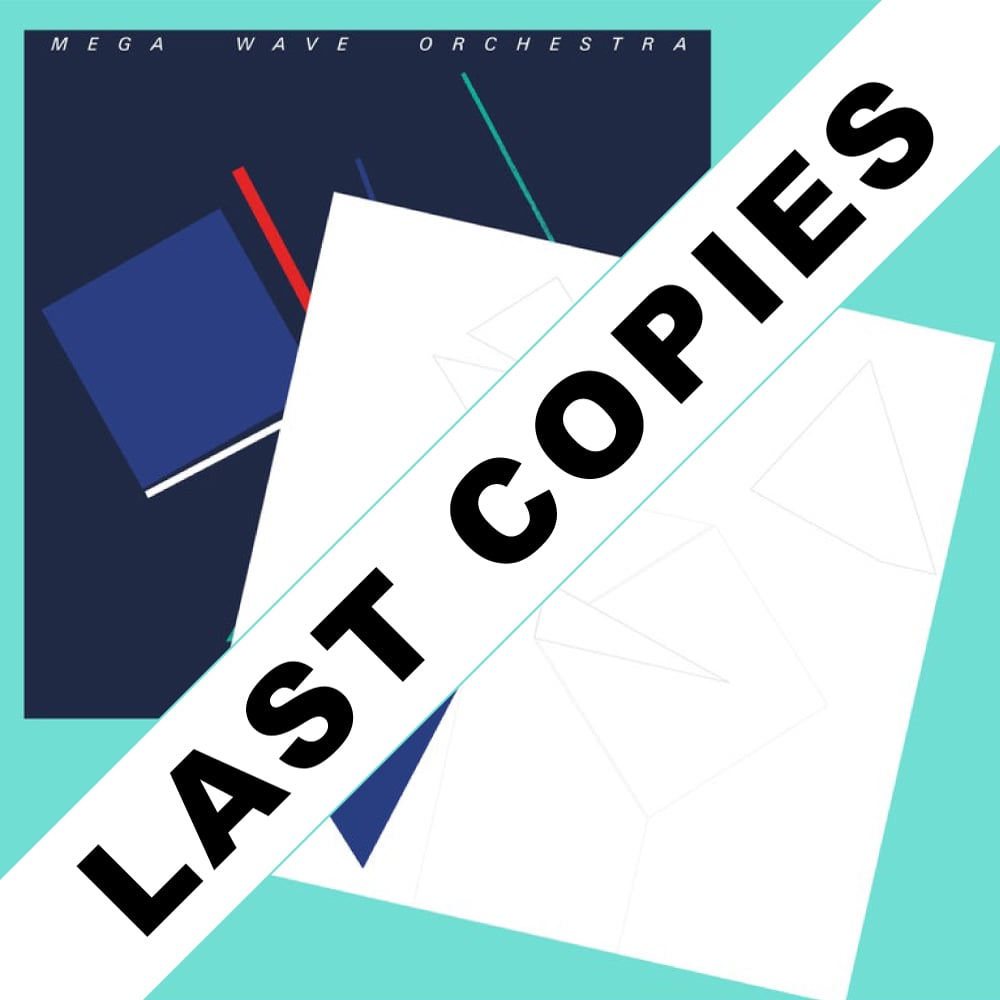 Limited to 100 copies including embossed artwork by H. Richard Reimann.

"When I'm working on a problem, I never think about beauty. I think only how to solve the problem. But when I have finished, if the solution is not beautiful, I know it is wrong.”
Richard Buckminster Fuller

The music on this compilation was, for the most part, originally released privately in Geneva as a box set containing five LPs by The Mega Wave Orchestra and five prints by the artist Richard Reimann. The Mega Wave Orchestra, the brain-child of musician, mathematician and composer Christian Oestreicher, was conceived as an multi-media electronic music big-band. It was comprised of seven keyboard players Christine Schaller, Vincent Barras, Jacques Demierre, Olivier Rogg, Rainer Boesch, Roger Baudet, and Benoit Corboz, with Oestreicher as arranger and producer, assisted by Yves Melan, and video specialist Yanick Ebinger.

Each of the five LPs was composed or devised by an individual member of the Orchestra acting as band leader, but arranged and mixed by Oestreicher in the Mega Wave Studio.

The Orchestra created a new hybrid music. It was a music with roots in the jazz and classical traditions, but one which also drew on the sonic freedom of musique concrete and the kind of total experience offered by psychedelia. The diverse backgrounds and specialisms of each of the band leaders/writers resulted in a wide variety of music across the five discs: from austere drones and granular aural detail to warm oddball fusion and gorgeous but cracked vocal jazz. But it was Oestreicher’s presence, at both the start and end of the process, that provided a sure conceptual framework and a comprehensive sound world. There are useful contemporary comparisons to be made: zoned synth jazz like the Azimuth LP on ECM or Karin Krog’s Freestyle; Larry Heard’s sequencer dreamtime; the Valium minimalism of Pep Llopis or Jun Fukamaki; Dexter Wansel’s shimmering arrangements for Loose Ends, or even the FM sheen meets cold war threat of Donald Fagen’s Night Fly. Here, too, is the sound of music technology about to snowball and define its own aesthetic, unknowingly prefiguring auteurish bedroom producers like Black Dog or The Detroit Escalator Company.

The heart of this music’s appeal lies in Oestreicher’s complex intentions and methodologies. He revels in occupying the unsteady ground between analogue and digital, pushing his players to robotic precision while opportunistically grabbing on to the unpredictable results of computer error. He harks back to communal rigour of big band or orchestra structures, while understanding beautifully that the sounds of the future will not be synthesised imitations of existing instruments but something entirely other. He seizes on the value of resituating or recombining the sounds given to him by his bandmates, twisting them out of shape to create vivid new worlds for the listener to occupy. As a mathematician, he approaches the problem of group music making with a seriousness that results in beauty as a matter of course.